The last lunar eclipse of 2012 is a deep penumbral eclipse with a magnitude of 0.9155 ( For comparison full moon has magnitude of -13 which can be seen at the end of this eclipse). It should be easily visible to the naked eye as a dusky shading in the northern half of the Moon. The times of the major phases are listed below (Indian timings in bracket).

Note that the beginning and end of a penumbral eclipse are not visible to the eye. In fact, no shading can be detected until about 2/3 of the Moon's disk is immersed in the penumbra. This would put the period of eclipse visibility from approximately 14:00 to 15:00 UT. Keep in mind that this is only an estimate. Atmospheric conditions and the observer's visual acuity are important factors to consider. An interesting exercise is to note when penumbral shading is first and last seen.

Figure shows the path of the Moon through the penumbra as well as a map of Earth showing the regions of eclipse visibility. Eastern Canada and  the USA will miss the eclipse entirely since it begins after moonset. Observers in western Canada and the USA will have the best views with moonset occurring sometime after mid-eclipse. To catch the entire event, one must be in Alaska, Hawaii, Australia, or East Asia (including India). 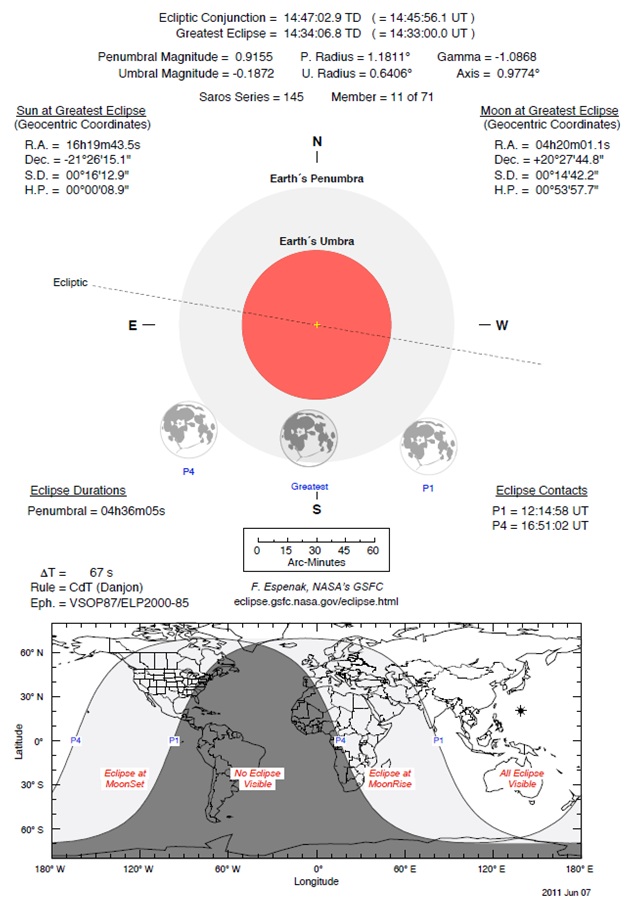 Visibility of Eclipse from India